Pen, Ink & Beyond is a video-course which will teach you how to draw comics. It is divided into 10 single lessons. During the 5 hours of the course, you will discover how easy it is to make your favourite characters come to life and act in the stories you create for them. The drawers (who have worked for Walt Disney Italia) will teach you how to draw your favourite characters starting from the basic shapes all the way through more complex techniques.

Giulio Chierchini:
He was born in Genoa in 1928. He started his career by producing a short feature animated cartoon entitled “Volpino e la papera ribelle” (Foxy and the disobedient duck – 1947). Thereafter he moves onto comics, creating together with G.B. Carpi the famous “Nonna Abelarda” (Granny Abelarda). Since 1953 he has been working as an artist and screenwriter for Walt Disney Italia writing and conceiving innumerable stories. Too many to list in detail. One of them however is worth drawing your attention to: “Paperin Pestello e la Via delle Indie” (Donald Duck and the way to the Indies) the Disney parody of Columbo’s celebrations.
The episodes of this work, set in Genoa the way it used to look like in the second half of the XV century, are based on strict historical research on the habits of that time, to the extent of becoming a suggestive portrait of Genoa towards the end of the XV century. This work was translated and published in a number of different languages and became the pride of Disney’s comics production.

Moreno Chistè:
He was born in Ulster, Switzerland in 1963. He started at a very young age to draw and illustrate projects of all kinds for advertising agencies and graphic studios. He attends “Istituto d’ Arte Victoria” (Victoria school of arts) where he qualifies in 1984. In 1988 he meets Giulio Chierchini, a well established artist and screenwriter of Walt Disney Italia. Then he starts to illustrate the famous “painted” stories for him. In 1991 he creates “Gaia” the pleasant mascot of 1993 kayak-canoe world championship. In 1992 he was called upon to produce the placard for the XXXI Topolino ski Trophy and for that occasion he produces a 16 page story for the comic book named alike. This marks his official debut not only as an artist but also as a screenwriter. His thorough knowledge of the most refined airbrush techniques allows him to produce illustrations and scenographies of highest artistic and technical quality.

Valerio Oss:
He was born in Trento (Italy) in 1965. After scientific studies he began his job career as programmer. In 1988 he attended in Milan the “school of comics/cartoons” experiencing in classical animation techniques, filmmaking and directing. In 1990 he began his collaboration with “Bozzetto Produzione Film” in Milan (Italy). Since 1993 he is actively collaborating with The Walt Disney Company Italia, producing comic books for the weekly comic “Topolino”, Marvel Italia, drawing the covers of comic books such as “L’Uomo Ragno” (Spider-man, Italian version). In 1994 he opened his own production studio (Pixel Cartoon) in Trento. In 1996 he created the Internet site of the Italian movie director Maurizio Nichetti with whom he actively collaborates in many new productions, on the web and on the set of his TV series and film productions.
In 1997 and 1998 with Pixel Cartoon he created an adventure game on CD-ROM “The Ghost Dinasty”, completely made with 3D techniques and live actors. In 2006 he started the development of the new project “Dr.Bombonico’s LOONEY LAWS of Physics”, an animated series to teach physics and science to children, in co-production with Cinegroupe Canada. In 2007 he directed and animated the short film for Italian Civil Protection “Civilino and the earthquake”, to teach children to behave during earthquakes.
Today he is continuing his work as director and developer of animated products, multimedia projects and exhibits for Museums, Internet sites, and Universities.

Sandra Verda:
She was born in Genoa in 1959. She graduated with the highest possible grade at the “Instituto per l’Arte ed il Restauro” of Florence in 1984. She then graduated in modern literature in 1989. In 1987 she worked with Giulio Chierchini on the creation of screenplays for “Topolino”. Since 1989 she has been collaborating with Walt Disney Italia as a scriptwriter and screenwriter. In 1990 she worked for Elemond publishing house as a textbooks revisioner. In 1992 she writes the script for the Disney parody “Paperin Pestello e la Via delle Indie” (Donald Duck and the way to the Indies), collaborating with Giulio Chierchini who edited the graphic. In 1991-1992 she taught commercial art and cartoons at “Endeform” in Genoa. She is also the writer of the novel “Il male addosso” published by Bollati Boringhieri in 1994, with which she won the Rapallo prize in 1995, the Targa d’oro – national literary prize Stefanelli in 1995 and the Premio Liguria prize in 1995. She also wrote the novel “All’ombra dei girasoli” published by Frassinelli in 1997. She is also collaborating with various magazines and newspaper as a literary critic and columnist. In 1997 she won the International Marcello Candia prize at the University Federico II – Napoli for humanitarian merits. 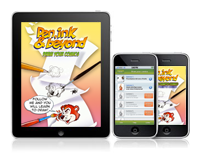 The application is available for iOS and Android of course. You can also choose the application in the PRO version, that at the cost of € 4.99 you will have immediately access to all lessons. If you choose the standard version you can see the first two lessons for free and purchase the course directly from within the application.